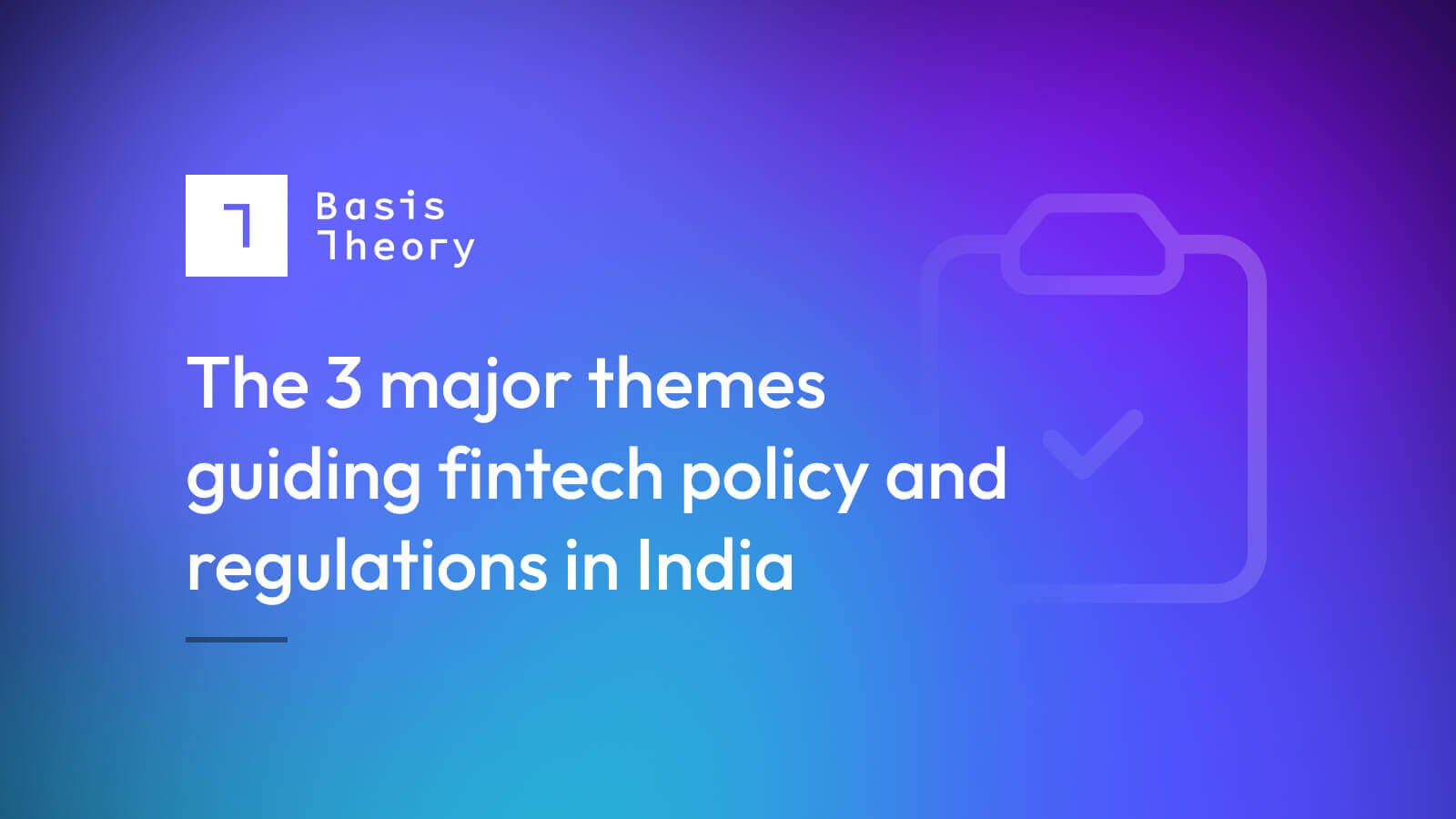 The 3 major themes guiding fintech policy and regulations in India

Our head of APAC breaks down the regulatory approach and policies fueling India’s rapid adoption and growth in fintech.

According to the Economic Times, India has the highest fintech adoption rate globally at 87%—13% higher than the global average. It’s also one of the fastest growing in the world. In 2020, the Reserve Bank of India (RBI) valued the nation’s fintech industry at $50-60 billion. Now, the RBI projects it to reach $150 billion by 2025.

This was no accident. India’s regulatory climate has shifted dramatically over the last few years, making aggressive decisions that have surprised many in the West. For example, the RBI mandated the use of tokenization to protect card data last year—a move designed to create consumer confidence and solve data breaches plaguing the ecosystem.

So what’s its secret? What should other policymakers, entrepreneurs, and leaders know about India’s approach? What does it say about our future?

Having led market growth in India and APAC for over 15 years, I’ve watched India’s digital journey—from its early first steps to the emerging global leader it is today in fintech. Here’s my take on the three trends driving fintech forward in India and some examples.

1. Financial inclusion is the mission

India projects itself to be the largest country by population by 2030, at a staggering 1.4 billion people. The sheer size and disparity in population dynamics necessitate serious and dramatic action. By addressing the bottom of the pyramid, financial inclusion will help promote financial stability and broaden the country’s socioeconomic growth.

As such, the Indian government has played an active role in providing its nation with modified financial products and services to help strengthen the availability of economic resources and build the concept of savings amongst the poor.  By leveraging and supporting technology and technology policy, financial inclusion can reduce income inequality and serve the underprivileged and the underserved.

The Indian government has introduced incentivization programs aimed at the economically disenfranchised to stimulate interest in financial inclusion. For example,  Pradhan Mantri Jan Dhan Yojana (PMJDY) offers a ‘RuPay’ debit card without minimum balance requirements. It also entitles the account holder to other benefits, including accidental insurance and an overdraft facility. In addition, the account holder can avail of other schemes such as Atal Pension Yojana (APY), Direct Benefit Transfer (DBT), Micro Units Development & Refinance Agency Bank (MUDRA), and others.

Access to digital funds plays a key role in financial inclusion, but fragmentation among providers, carriers, and other stakeholders made it difficult to engage in commerce and muddied customer incentives.

The Indian government is investing billions into its digital financial infrastructure to address this. New policies and upgrades to the nation’s Unified Payment Interface (UPI), Unstructured Supplementary Service Data (USSD) banking methods, Immediate Payment Service (IMPS), National Electronic Funds Transfer (NEFT), Aadhaar Pay, and BHIM attempt to harmonize and increase the value they provide its users. In fact, the National Payments Corporation Of India (NPCI) is projecting 10X growth in UPI in the next five years—up to over a billion digital daily payments transactions or over 10,000 transactions per second.

This direct investment and broad support sent a powerful signal to the market. As a result, it’s now expected that, by 2023, digital wallets will overtake cash as the leading point-of-sale payment.

2. Customer data protection and privacy are core to its mission

India, the world’s fastest-growing market for new internet users, has seen an explosion of personal data as millions of new users have come online and started using hundreds of free and paid apps that store the data. The Modi government, for its part, manages the world’s largest repository of biometric information. India’s success, however, depends on its ability to build and maintain its people’s trust in these new digital tools and programs.

Admittedly, it’s off to a rocky start, however. Both public and private breaches have rocked the country in the last few years. India ranked second as the worst-hit country in data breaches in the first half of 2022, according to Surfshark. Meanwhile, dodgy fintech apps designed to take advantage of the desperation caused by COVID have plagued Indians. To combat this, India has been backing progressive data security and compliance regulations with aggressive timelines.

To mitigate card fraud, the RBI mandated merchants use tokenization to replace holding card data on file. It's a well-thought-out approach by RBI that demonstrates its commitment to data privacy and protection. For one thing, merchants capturing a customer card must explicitly consent to the practice and select parameters to govern future payments. At the same time, by replacing a card number with an undecipherable “token” within a merchant’s environment, RBI also mitigates the risk associated with plaintext data breaches across its economy.

While RBI allowed extensions to its implementation, the full tokenization requirement will come into effect on October 01, 2022.

To crack down on fraud and unlawful activities in the lending space, India’s central bank has released a new regulatory framework stipulating that only regulated entities can disburse loans and repayments with borrowers' bank accounts. The framework also provides new requirements and language to strengthen disclosures and eliminate hidden fees and penalties.

Creating a sustainable economic engine requires a strong partnership with the private sector. While strong public-private partnerships are not new in public policy, India hopes a heightened level of involvement and transparency from its government will avoid endangering its financial inclusion goals and consumer trust.

Fintech firms offer the latest technology, user experiences, and incentives to promote financial inclusion, but they often lack the consumer and regulatory credibility needed to draw customers or investments. To counter this, India’s government has taken moves to legitimize the space by clarifying guidelines, setting standards, and encouraging relationships with traditionally regulated industries. For example, the Finance Ministry has asked Public Sector Banks (PSBs) to explore fintech partnerships and co-lending opportunities to expand their business.

The context shaping and governing the use of data today in India and throughout the world is evolving faster and faster. By consolidating, protecting, and abstracting regulated sensitive data, tokenization minimizes an organization's security and compliance surface area without sacrificing utility.

Interested in learning more? Ask one of our experts today.