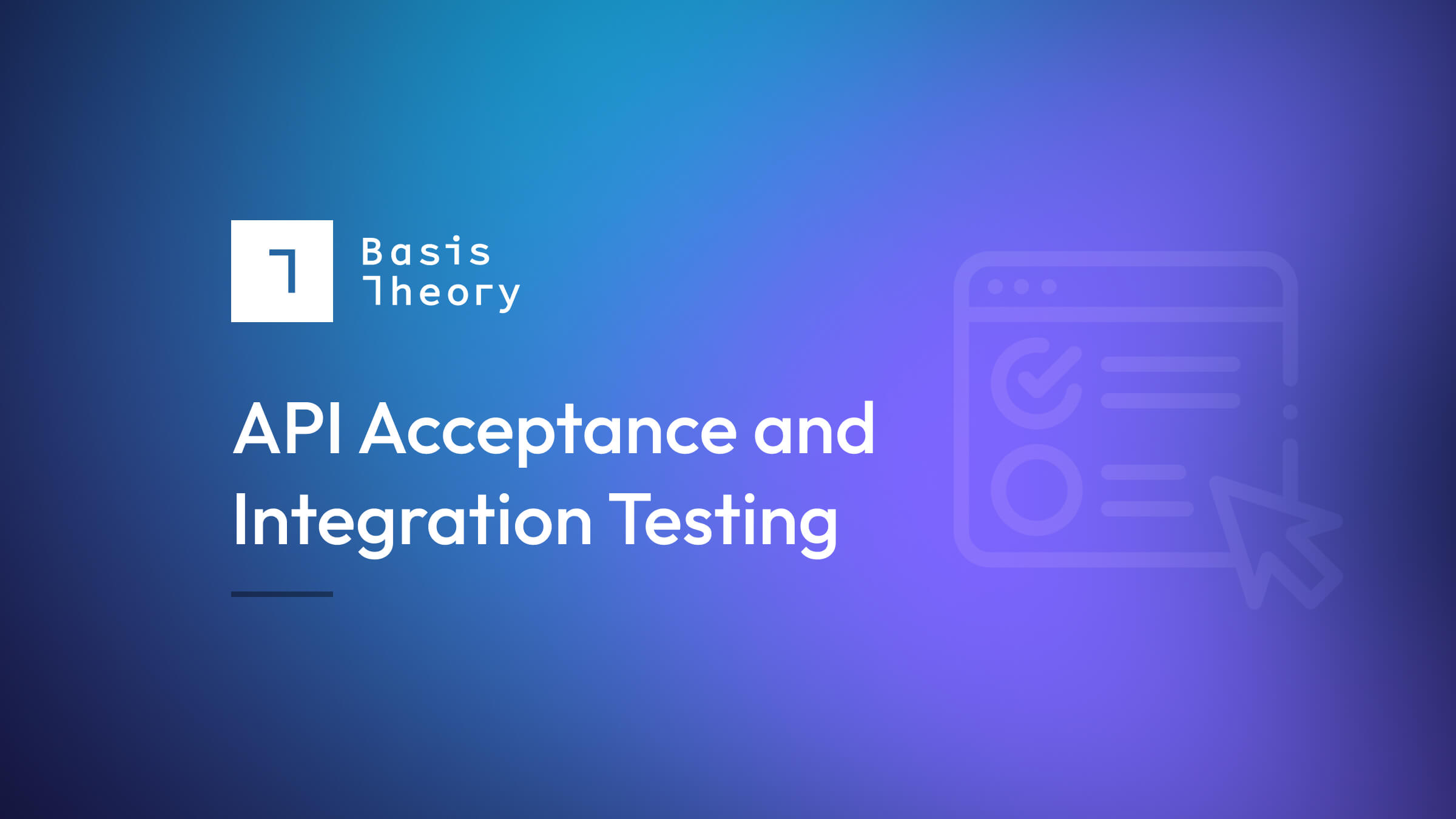 In the second post of our six-part series on software testing, we outline our approach, tools, and code we use to test the Basis Theory API.

In the first installment of our “Shipping code quickly with confidence” series, we reviewed the various testing layers and principles we use at Basis Theory. This post goes deep into our approach to API Acceptance and Integration Tests, including links to a sample application to see everything come together!

Our approach differs from traditional testing strategies, where unit tests are often the foundation of the swiss cheese model. Instead, we spend the most time writing Acceptance Tests against our systems. This gives us the fastest feedback loops in our development workflows. Unit tests are great for verifying business logic in methods and classes, but they are tightly coupled to the implementation, which inhibits our ability to refactor the implementation without also modifying the tests. Focusing on “black-box” Acceptance Tests against our applications results in high cohesion, allowing us to refactor the code without modifying the tests.

It’s not that we don't write any unit tests; unit tests just aren’t our primary tool.

What does an Acceptance Test cover?

To understand what an Acceptance Test covers, we have to first understand its boundaries. Acceptance Tests should treat the system under test (SUT) as a black box. In other words, the test should only rely on the public interfaces exposed by the SUT. When we test a RESTful API, the test should only interact with the API via HTTP requests and responses, asserting that the request and response satisfy the acceptance criteria.

Acceptance Tests cover a single unit of work or action that can be taken against the SUT. When testing an API, a unit of work would be a single HTTP request/response. Acceptance Tests focus on the behavior of a system rather than the implementation of a system. The term Behavior Driven Development (BDD) comes from this approach. A traditional unit test may look something like the following:

An Acceptance Test verifying the same behavior could be:

Rather than mocking an HTTP client to avoid making a network request, our application runs in “acceptance” mode, where we configure the same HTTP client to make requests to a mock server controlled by the Acceptance Test. Mocking an external dependency can be done in various ways. Tools like Wiremock allow us to stub API requests and responses to easily mimic happy and sad-path scenarios.

Often, the external dependency is an implementation of a specification like OAuth 2.0, OpenID Connect, or JMS. In these scenarios, we leverage open-source tools, such as IdentityServer, that implement the specification rather than trying to emulate the actual provider.

At Basis Theory, we leverage all of the above alongside Docker Compose to stand up an ephemeral environment on our local machines that we can run Acceptance Tests against. We use the same commands to verify our systems locally and in our CI/CD pipeline.

Each test, regardless of strategy, consists of three sections: Arrange, Act, and Assert. In BDD-speak, these terms are commonly referred to as Given, When, Then. Arrange is the setup portion of the test, Act is the action being taken, and Assert is the verification(s) that the actual behavior observed aligns with our expectations. Each test follows this layout to improve readability and troubleshooting of failing tests. To further improve the readability and findability of tests, we consistently do the following:

The fastest feedback loop is running the application on your local workstation when developing a new feature. We make use of Make (punny, I know) to run scripts that:

Through the use of one command, <span class="code">make verify</span>, we create an ephemeral environment and run all of our Acceptance Tests on our local workstation in minutes!

Opening a pull request to the repository's default branch kicks off our CI pipeline. Thanks to automation, our pipeline uses the same <span class="code">make verify</span> command to verify the code. The consistency between local development and our CI pipeline enables us to troubleshoot any failures in the pipeline without having to push new code.

The next layer of our swiss cheese model is Integration Tests. Integration Tests are similar to Acceptance Tests in that they treat the system under test (SUT) as a black box and only interact with the SUT through the public interface. However, Integration Tests differ from Acceptance Tests in that they run against a deployed environment, typically a development or staging environment. These tests verify that we configured the system to correctly communicate with external dependencies (e.g., filesystem, API, database).

The environment that these tests run against should be as identical to production as possible. Thanks to tooling that enables Infrastructure as Code (IaC), creating repeatable environments and infrastructure is as simple as ever.

To verify connectivity with external dependencies, we need to create Integration Tests to verify scenarios that depend on these external dependencies. At Basis Theory, we focus our API integration tests on the entire lifecycle of a resource. For example, we test that Applications can be created, read, updated, and deleted through the appropriate API endpoints.

After each deployment to our Development environment, our CI/CD pipeline runs the full suite of Integration Tests. If a single test fails, the pipeline halts and blocks the promotion of the artifact to higher environments (e.g., Production).

Since we can configure our Integration Tests to point at any environment we have access to, we can also run these tests whenever we like. We can run Integration Tests from our local machine against a deployed Development environment or target a local ephemeral environment. This flexibility dramatically improves the developer experience when writing new tests or debugging a flaky test.

The goal of any test is to add confidence that the code, application, or system behaves as expected. So far, we’ve covered acceptance and Integration Tests, but how confident are we in our testing pyramid?

Are we confident that the application’s programmable interface does what we expect? Yes, the API Acceptance Tests provide this confidence by validating the system's behavior across various happy and sad-path scenarios.

Are we confident that the application can communicate with external dependencies? Yes, API Integration Tests provide confidence that our application can communicate and receive traffic from external dependencies in a deployed environment. E2E Integration tests cover the systems as a whole, replicating user behavior in a production-like environment.

Are we confident that the application’s user interface does what we expect? Not yet.

Are we confident that the application is always available? Nope. Not yet.

Are we confident that the application can handle production throughput and beyond? Uh uh, not yet.

Are we confident that the application is free of security vulnerabilities? Also, not yet.

‍Are we confident that the application is secure against common attack vectors (e.g., OWASP)? Not yet.

Don't worry. By the end of this series, "Yes" will be the answer to all of the above questions. So stay tuned for our upcoming posts on the remaining testing layers, when to use them, and how they add confidence to our SDLC!