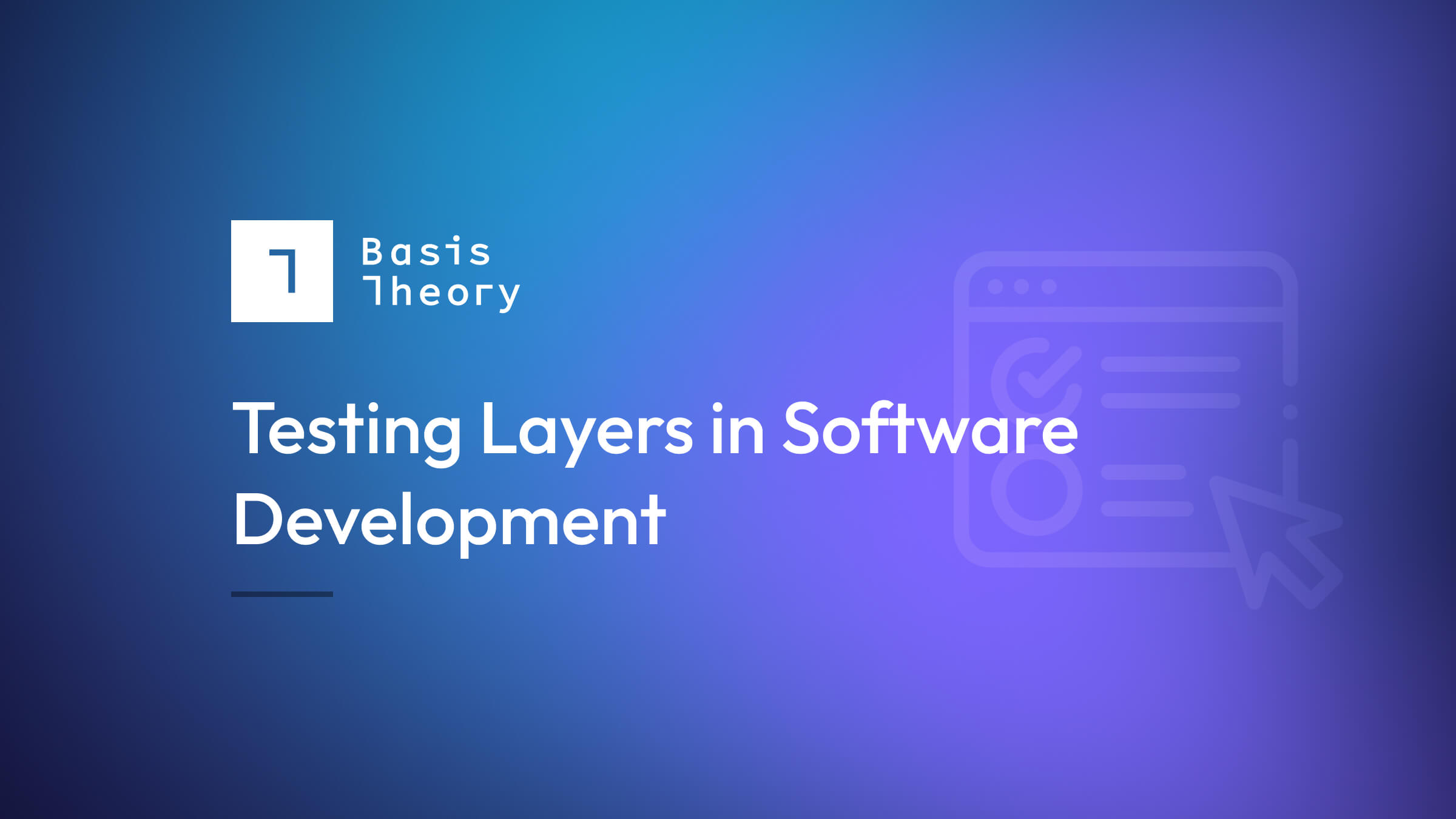 In the first of our six-part series, we share the different testing layers and principles used by Basis Theory to quickly and confidently ship its products and services.

As of publication, a team of 8 engineers at Basis Theory have had 3,353 pull requests merged in the last 12 months—with zero production issues reported by customers.

There’s always room for improvement, but our current approach allows any engineer to confidently contribute to any part of our system without the fear of impacting customers or compromising our security and compliance postures.

We felt a foundation was needed before getting to the real-world examples and working code samples in the blogs to follow, so this article will do just that by outlining some of the different test methods and principles used by Basis Theory across our teams.

As a compliant and developer-friendly platform for securing and using sensitive data, our customers rely on a healthy system that performs as intended. At Basis Theory, we use a multi-layered testing approach that catches bugs, reduces feedback loops to developers, and increases confidence across the board.

Here’s a snapshot of the tests we use today.

Testing Principles for Speed and Confidence

We have adopted several testing principles at Basis Theory which enable us to rapidly develop and refactor our product, provide faster feedback loops, and identify business requirements. These principles have been tested across several organizations of various sizes in various industries.

Unit tests have value for edge cases such as checking (de)serialization of data, encrypt/decrypt operations, or checking for breaking schema changes in an API. Still, due to their limited scope, they rarely help assert an application's business functionality. We have found that focusing on acceptance tests enables our team to refactor our systems without changing our tests rapidly and enables us to validate external dependencies such as reading and writing to a database.

Acceptance testing focuses more on how the system should behave than how the system is implemented. Leveraging Behavior-Driven Development (BDD) frameworks such as Cucumber can also unlock the ability for less-technical individuals to help write acceptance tests that the engineering team can implement.

Test one thing at a time

We have found that writing lots of tests, which perform a small number of assertions, enables us to have more declarative tests, e.g., test names that describe the behavior being tested. An example of this would be:

Add a dash of randomness

Randomness adds confidence to our tests by asserting the application's behavior satisfies the acceptance criteria. To do this, we leverage testing libraries to generate fake data models that satisfy the API, allowing us to verify the behavior of the system without limiting our test scenarios to a few known possibilities.

For example, say we need to test a calculator function that returns the sum of two numbers. If we only assert that calling the method with 2 and 2 returns 4, the implementation could be doing addition, multiplication, x^y, or hard-coded to return “4”. Randomly generating the inputs catches these bugs. By randomizing the values, they may be 3 and 6, which should return 9, eliminating the non-addition or hard-coded operations.

Treat the system as a black box

Black-box testing checks the inputs and outputs of the system, allowing engineers to change easily or even replace the application with a new solution without modifying the tests themselves. This gives engineers a way to test end-to-end paths through an application, making them useful for proving API endpoint security, input validation, business functionality, and external dependencies— such as a new record was written to the database or a call to an external system occurred—all work as intended.

Recompiling or changing our software system between deployment stages introduces potential regressions that need to be retested. In order to reduce this potential risk, we want to compile our software systems exactly once and promote the resulting artifact between deployment stages. (Examples of these artifacts include a Docker container or a compiled binary.)

To do this, we compile the software system and run Unit, Acceptance, and UI Tests to ensure business requirements are satisfied prior to merging the change and promoting it to a deployed environment. Changes to the application’s behavior should be accomplished via configuration changes and tested using Integration, Synthetic, Load, Security, and Compliance testing.

Check out our complete testing series

The other blogs in this series will explore the testing layers mentioned, providing different strategies, examples, and working samples.